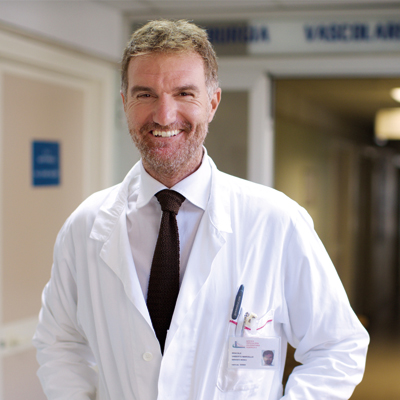 For some years he has been a member of the Scientific Committee Me.F.A.V.S. (Mediterrean Federation for Advancing Vascular Surgery). The Network Me.F.A.V.S. aims to promote cooperation between the major vascular surgery institutions in countries bordering the Mediterranean, from Southern Europe to North Africa, the Balkan area, the Middle East and all those countries that are likely to be included in the network. The Federation configured as an International network aims to promote knowledge, experiences, training, exchange of research projects, with an eye to new technologies in the field of diagnostics and treatment of vascular diseases.

As a member of the Stille Advisory Committee within the STILLE Ambassadors program and a long-time user of the Stille line of surgical imaging tables, first with ImagiQ and for some years with ImagiQ2, Prof. Umberto Marcello Bracale shares his experience:

To perform most endovascular procedures a mobile room must have the necessary qualities. In our department, we carry out over 400 interventions (number of interventions per year).

The new mobile C-arms, available on the market today, have technology and features that emulate the advantages of a hybrid operating room. The operating table plays an important role and a few of these tables are designed to work together with the C-arm just like the STILLE imagiQ2 table. The table has several features to enhance the experience of the endovascular operating room, an ultra-thin design and a super low base to integrate any size of the C-arm and high performance, carbon fiber top to provide transparency and to reduce the radiation dose from the C-arm without compromising image quality.

The previous version of the STILLE table, STILLE ImagiQ, had similar characteristics in terms of stability but the new STILLE ImagiQ2 improved all its performances, offering a total stability even when there is the need to convert the surgery into open surgery , leaving no “trampoline effect” that results on other tables on the market.

With its characteristics and total reliability it is the ideal partner for our room.